NORSAR collaborates with the Geological Survey of Norway (lead organization) and five more partners leading a geophysical research project investigating the present-day and palaeo stress and strain fields around the Vestfjorden Basin in northern Nordland. The project is part of the PETROMAKS2 program of the Norwegian Research Council and co-sponsored by eleven industry partners.

This region is the seismically most active in mainland Norway and was the site of the largest earthquake recorded in Norway (1819; M5.8). The region exhibits irregular patterns of uplift and young (mainly Pleistocene) exhumation, which in turn have effects on geohazards and hydrocarbon reservoir integrity. The coinciding patterns of sediment loading/unloading and compressional/tensional earthquakes indicate that there is a causal relationship between the two phenomena (see figure).

NORSAR is responsible for WP 1: “Seismological observations and analyzes” together with the UiB, which include the operation of a seismic network with 21 stations between Mo i Rana and Harstad. The data are recorded locally and also sent in real-time to NORSAR and the UiB for detailed analysis. As an outcome is expected to provide an extraordinary high resolution image of earthquake distribution inside and around the Vestfjorden basin along with extracted information on focal depths, type of faulting and stress direction as indicated in Fig. 1. By spring 2016 we have been able to derive 88 new fault plane solutions, representing a “quantum leap” for seismological monitoring in this region.

A detailed seismological survey together with analysis of GPS and DInSAR data as well as in-situ stress measurements will yield a comprehensive map of the present-day stress field and surface deformation. This will then be applied in a numerical modelling study to investigate the contributions of different stress field components such as topography, glacial isostatic rebound and Pleistocene sediment redistribution. With the knowledge of the offshore distribution of Pleistocene sediments, the effects of exhumation/sedimentation on the stress regime and thermal field will further be investigated with mechanical and thermal numerical modelling.

Our study aims to reconcile how present-day deformation relates to the Pleistocene uplift. The implications for petroleum systems of such processes are fundamental in terms of thermal history of the basins and of their reservoir integrity. 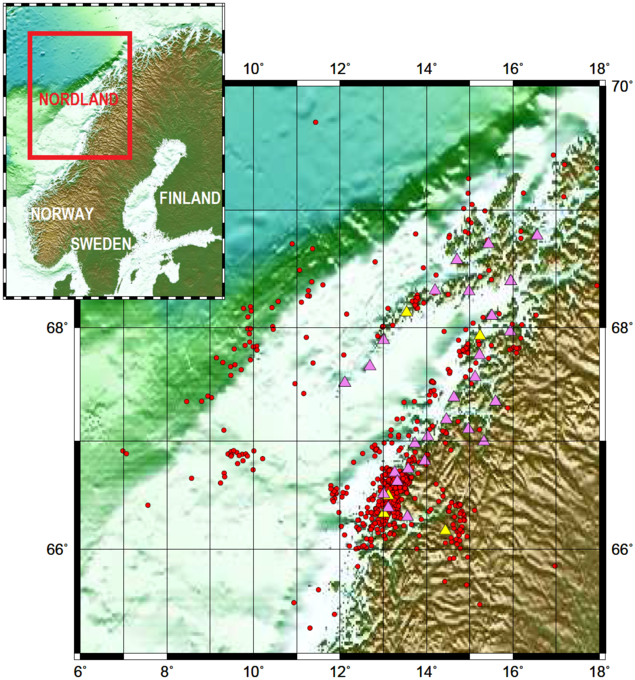 Map of Norway indicating the territory of Nordland, and map of the temporary NEONOR2 deployment (purple) and the permanent NNSN deployment (yellow) in the Nordland area. Red circles show epicenters of located 1068 possibly natural seismic events in Nordland during the period from June 2013 until October 2015.