CO2 storage in the North Sea

NORSAR is currently participating as a theme lead within the GSCO2, a US DOE EFRC (Energy Frontier Research Centers). Previously, NORSAR also established the baseline microseismic monitoring and feasibility study for geophysical CO2 storage monitoring on in the Arctic at the UNIS CO2 Lab on Svalbard near Longyearbyen. Another active project is connected to the Groningen gas field in the Netherlands. Here, NORSAR is working on induced seismicity aspects and how such detection and location schemes could be transferred from land to potential offshore CO2 storage in the North Sea. This work builds upon excellent knowledge of a complex velocity structure and provides a best case scenario for upcoming large-scale CO2 storage monitoring within the North Sea.

At the Krechba, In Salah, gas field, CO2 is injected through three horizontal wells at the flanks of a producing gas field. Re-calibration and checking of installed downhole geophones is conducted e.g. with hammer strikes at certain positions, which is needed for processing and analysis of recorded microseismic activity. 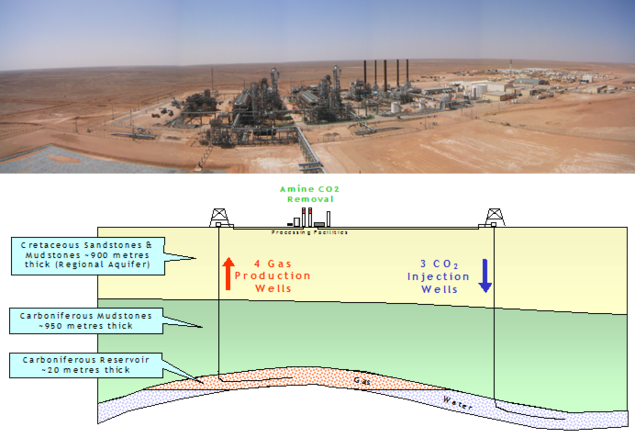 Preparing for CO2 storage in the Artic, Longyearbyen, Svalbard

The key requirement to a safe geological storage of CO2 is to be constantly aware on the position of the injected CO2 and to identify potential leakages quickly. CO2 injection in an underground structure introduces changes in the stress field and may invoke microseismic events. Continuous microseismic monitoring provides real-time event location, thereby identifying the seismically most active regions in the storage and its overburden and serves as an alert system when the structural integrity of the storage is endangered. Furthermore the interpretation of the spatiotemporal occurrence of microseismicity can be interpreted to some degree with the propagation of CO2 and serves as input to time-lapse (4D) seismic modelling. The 4D modelling will reveal changes in migrated seismic sections that are due to changes in the rock properties and will be compared with real 4D seismic data. The mechanism type of microseismic events will assist in modelling potential up-doming and stretching of the storage and its overburden and also act as alert system, e.g. in case of cap rock fracturing preceding major leakages.

The geophone network is continuously monitoring the activity at the Longyearbyen CO2 LAB on Svalbard. 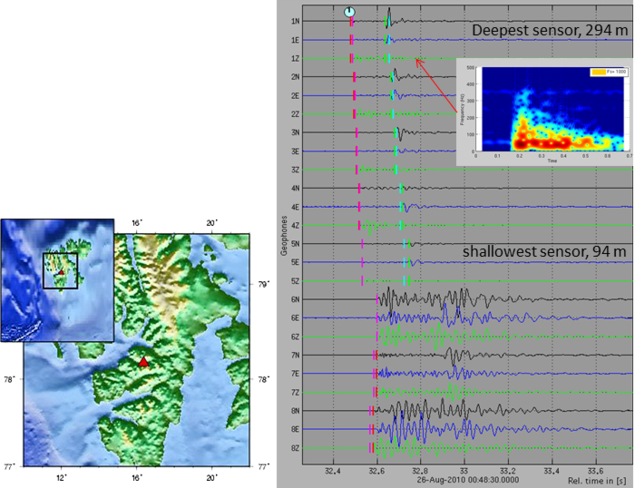 The figure above shows an example of a micro-earthquake. The micro-earthquake occurred several hours after a 5-day water injection experiment was recorded clearly on all channels.