NORSAR's approach and interest in deep geothermal energy are the development of seismic control systems for safe construction and operation of geothermal plants. Small earthquakes that are created by hydraulic fracturing in the reservoir, or by pressure- or temperature changes in the reservoir during operation, have shown to create anxiety within the public around such plants, and a public concern that is often enhanced by speculations in the media.

NORSAR wants to contribute to safe industrial utilization of deep geothermal energy by developing seismic monitoring methods and disseminate knowledge and data that can refute speculations and create confidence within the society. The institute participated in the EU research project (GEISER) with this objective, and participated also in an industrial project in Australia together with IESE where deep geothermal energy will be exploited from solid rock holding a temperature of ca 250°C at 4 km depth. 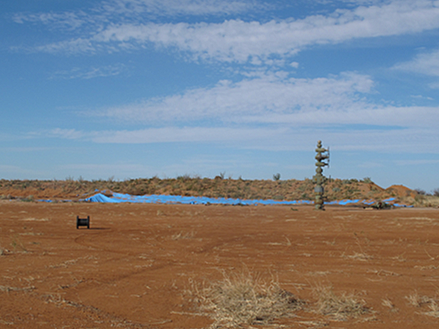 The picture shows a wellhead for an injection well at 4 km depth at the Paralana Enhanced Geothermal System, Australia. Injecting water under high pressure in the reservoir, more than 7000 microseismic events were localized in the reservoir using NORSAR developed software.

The principle of Enhanced Geothermal Systems (EGS) is to create or re-activate fracture networks in the subsurface that are accessed by a doublet or multiplet of wells. For a successful EGS the following criteria must be met:

Consequently, geothermal energy is transported to the surface, where it can be converted to electricity by driving turbines, or further applied to process heat or space heat.

One striking advantage of geothermal energy opposed to other renewable energies such as wind and solar is that it can provide true base-load power. The concept of EGS is not new and research projects started already in the 1970’s to investigate its applicability. Along with the recent quest for clean energy, the EGS concept became again attractive and commercial projects to exploit geothermal energy are now increasing world-wide. 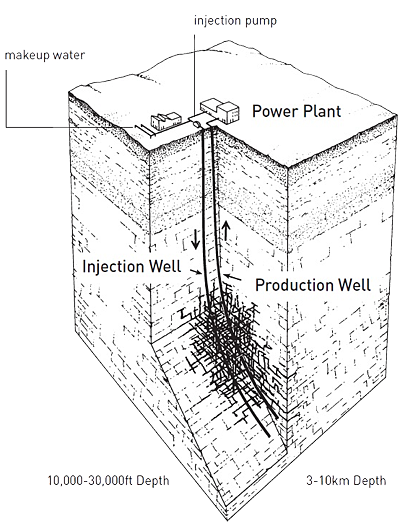 The figure shows a schematic view of the Enhanced Geothermal System concept. The cold water enters the fracture network through the injection well, where it is heated up and brought back to the surface through the production well. At the power plant, electricity is produced by heat exchangers and turbines, and the water is re-injected in the reservoir (from Tester et al., 2006).

NORSAR is partner within the Norwegian Center for Geothermal Energy Research (CGER), which was established in 2009. The Center, which has partners from all over Norway, is based in Bergen with Christian Michelsen Research AS (CMR) as the Host Institution. The Center gathers key research and industrial partners, and builds a platform which strengthens national cooperation in research and technology development within geothermal energy research and development. The Center covers through its Partners a range of areas within fields such as resource mapping and geological surveys, drilling technology, environmental impacts, reservoir engineering, process technology, energy conversion and system modeling. Geothermal energy as a source for heating, cooling and power generation is covered by the center's areas of interest: