NORSAR's seismic stations can be used as an additional tool to permanently monitor glaciers and ice sheets, when satellite based methods have coverage problems due to non-stationary satellite positions, weather conditions or polar nights.

During the last decades, the stability of the large ice sheets in the Polar Regions became of special interest due to their influence on the mean sea-level height and the global ecosystem. Since 2009, NORSAR is participating in the Greenland Ice Sheet Monitoring Network (GLISN), an international project to monitor the stability of the Greenland ice sheet by contributing its data from seismic stations and arrays in the European Arctic.

Since many years, NORSAR is cooperating with the University of Oslo in analyzing icequakes and the surge and calving of glaciers on Spitsbergen. Based on the observations of the SPITS seismic array, located close to Longyearbyen, and supplemented with data from other single seismic stations on Spitsbergen this on-going study could e.g., document the seasonal dependence of calving related icequake activity in many glaciers on Svalbard, as well as two surging events. 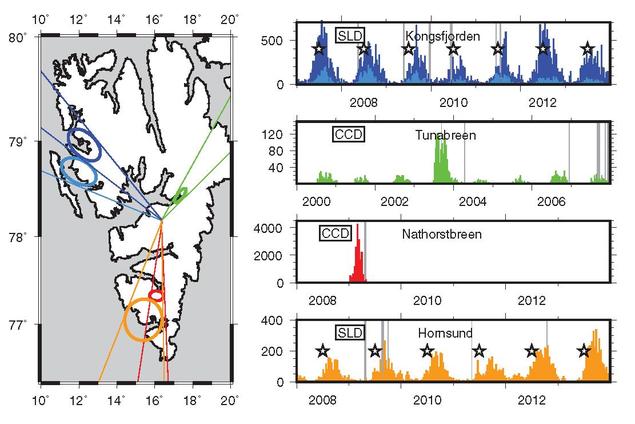 The figure shows the seasonally varying icequake activity at some of the glaciers on Svalbard. The panels on the right show the over the years observed number of icequakes located for the investigated glaciers. The oberservations were made with the seismic array SPITS located in the centre. Two of the glaciers (Tunabreen in 2003, Nathorstbreen in 2009) had during the last decade surging periods indicated by the large amount of icequakes occurring in short time. The stars indicate the time during the year, when the highest temperatures were measured at the meteorological stations in Ny-Ålesund, Kongsfjorden and at the Polish Research Base Hornsund. Copyright: Köhler et al., 2015.

In 2012, NORSAR could install in cooperation with the Norwegian Polar Institute (NPI), as part of a Norwegian Antarctic Research Expedition project a modern seismic station at Troll, the Norwegian Research Base in Dronning Maud Land, Antarctica. Located inside the continent, this station is also recording icequakes and other seismic signals from the cryosphere. One interesting observation is that it is possible to observe and monitor tabular icebergs drifting along the coast line of Dronning Maud Land. Along this drift the tabular icebergs bump against each other or against the ice-shelf, they calve in smaller pieces and they interact with sea waves. All this radiates elastic waves, which can be observed with seismic stations. At Troll signals could be recorded and associated with iceberg movements up to a distance of about 500 km.

Whenever larger ice masses are in movement, this movement can be divided into viscous flow and instantaneous slip or failure of the ice masses. In particular calving events at glacier fronts, of ice-shelves and of tabular icebergs are connected with large fracture zones. Each such episode radiates elastic waves, which can be observed over large distances, depending on the size of the event. Since all these movements occur close to the Earth’s surface, the radiated elastic waves can travel as seismic waves through the solid Earth, but such elastic waves are also observed after travelling through the atmosphere as sonic or infrasonic waves and after travelling over huge distances through the oceans as hydro-acoustic waves.

That icequakes radiate seismic waves is known in seismology since a long time. However, only more recently, an increasing number of seismologists, also at NORSAR, has started to study icequakes and other seismic signals from the cryosphere. Modern high sensitive seismic stations and seismic arrays are operating continuously and they can also record the relatively small events from the cryosphere over relatively large distances. 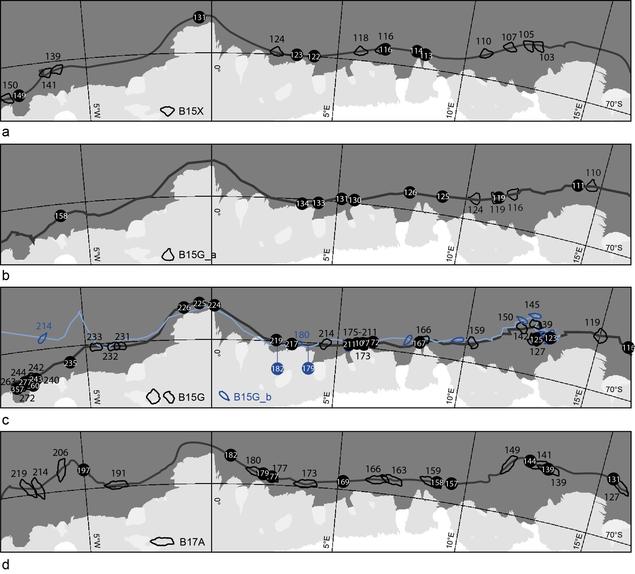 Iceberg positions of five tabular icebergs and their orientations from satellite images (black and blue iceberg outlines, shown to scale). The numbers denoting the day of the year in 2012. Filled circles are iceberg positions for which iceberg-signals were observed at Troll. Iceberg trajectories (grey and light blue lines) are taken from the Brigham Young University Antarctic icebergs daily positions database. (a) Course and positions when seismic signals could be associated with iceberg B15X. (b) Same as (a) for iceberg B15G_a. (c) Same for icebergs B15G (black) and B15G_b (blue). (c) Same for iceberg B17A. Copyright: Pirli et al., 2016.

The cryosphere consists of glaciers in the Polar Regions and mountain areas all over the globe, extensive ice sheets covering wide areas of the two Polar ice caps in the Arctic and Antarctica, ice-shelves around the Antarctic continent, sea, lake and river ice, permafrost soil and the seasonal snow cover. Many parts of the Earth’s cryosphere can be described as remnants of the last ice age(s), but the huge ice sheet covering Antarctica exists for more than 40 Million years.

All ice masses on the Earth are in slow movement. Glaciers transport ice from topographic high to low regions, they flow and if they reach the sea, they calve into ice blocks that are launched them as icebergs in the sea. This is a more or less continuous process, but some glaciers can have periods of instability with a large increase of their flow velocity. During such episodes, known as surging events, glaciers transport large volumes of their ice masses.

The huge ice sheets also transport ice from onshore areas to the sea, where they form ice-shelves. Ice-shelves can also calve and produce huge tabular ice bergs, several hundreds of meters high and as large as hundreds of square-kilometers.

This dynamic behaviour of the Earth’s cryosphere is very much depending on the temperatures at the Earth’s surface and in the oceans, and already small temperature changes can have drastic impacts. Due to the observed rising of the mean temperature of the Earth’s surface the whole cryosphere is globally in change. Rising temperature is not only making the ice more mobile and lets glaciers retreat, but it can also contribute to higher precipitation in specific regions, and with this to a larger production of snow and ice; both phenomena are observed today.