Infrasound is the subject of growing international interest, thanks to its capacity for atmospheric probing as well as for detection and location of acoustic events, such as microbaroms (from ocean swell), rocket launches, meteors, volcanic eruptions, large earthquakes, as well as mining and other explosions.

The infrasound stations monitor infrasound signals in the atmosphere. The stratosphere and the mesosphere are atmospheric layers covering altitudes between approximately 12-50 and 50-80 km, respectively. The dynamics within these layers and the interaction between them and the underlying troposphere are not fully understood, largely because the direct wind and temperature measurements are sparse both in time and space. Especially for the wind within the 30-70 km altitude range.

A change in the stratospheric wind and temperature fields can be a pre-cursor to periods of lower winter temperatures in Europe because SSWs can precede colder surface weather in North America and northern Europe by a couple of weeks or months.  Early and confident detection of SSWs hence has the potential to improve the robustness of long-term weather forecasts.  The SSW events involve large and rapid stratospheric temperature increases of up to 40º. They mostly occur mid-winter in the Northern Hemisphere where the polar cap westerlies are slowed down or reversed rapidly: often within a few days. Typically, an SSW leads to the polar vortex being either split or displaced away from the pole, or both. The direction of the stratospheric wind greatly influences the efficiency of infrasound wave propagation, and by monitoring the directions in which microbarom signals are detected at our infrasound stations, information on the stratospheric wind can be inferred.

Continuous infrasound monitoring of the microbarom detections and signals from repeating mining and chemical explosions hence has the potential to help make long-term winter weather forecasts more reliable. In addition, recent research suggests that observations at NORSAR’s infrasound stations can be used for early detection and enhanced understanding of other extreme events like polar lows and strong weather systems. 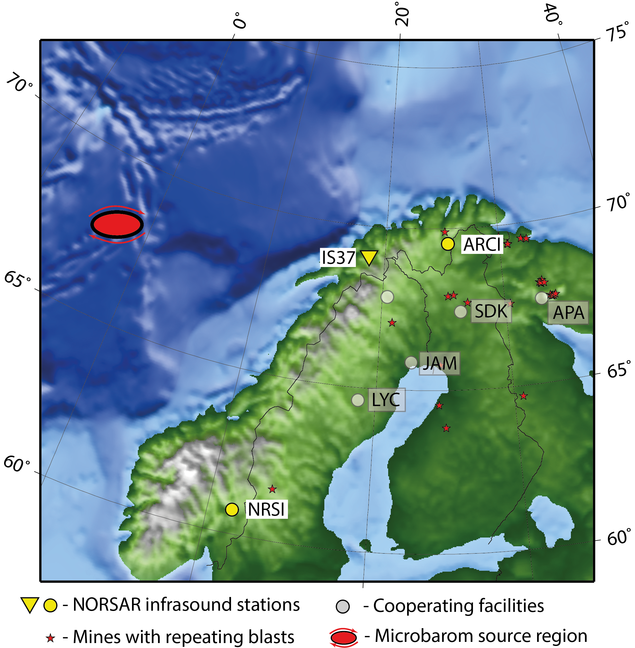 Map showing the distribution of infrasound stations and repeating infrasound sources in the Nordic/NW Russian region. 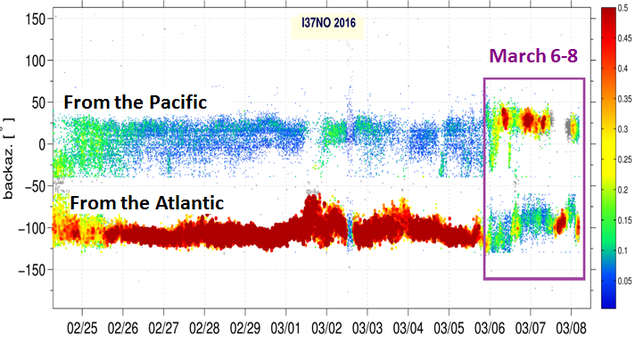 Microbarom observations between Feb. 25 and March 8, 2016 at NORSAR's IS37 infra­sound station in Bardufoss, Northern Norway.  On March 6 we see how infrasound from Pacific microbaroms gets amplified while infrasound from Atlantic microbaroms is weakened, indicating the onset of a Sudden Stratospheric Warming.

Infrasound are air-travelling waves created by man-made and natural sources and phenomena, having frequencies below those audible by the human ear, typically below 20 Hz.

Infrasound in the atmosphere has very low attenuation and can thereby propagate effectively over large distances. Infrasound signals observed on the ground may have propagated up to altitudes of more than 100 km, and thus carry back information about temperatures and winds at these high altitudes.