On December 30, a terrible landslide resulted in devastating casualties in Ask, Gjerdrum. Worried local citizens told the press about shakings they thought could be an earthquake before the landslide and contacted NORSAR. Based on our cooperation within Europe, we knew that quick clay could liquefy after earthquake although this has not been documented in Norway before.

Now, after a throughout analysis of the data conducted by instruments nearby (red squares), NORSAR concludes there were zero observed earthquakes around the time and location of the landslide. More specifically, we investigated the 28, 29 and 30 of December and registered two minor earthquakes at 10.00am and 01.00pm on December 28 (orange circles). These, however, were under magnitude 1 and not felt by humans.

Although this was not caused by earthquake, Gjerdrum, and the area around, does hold a possibility of experiencing earthquakes. This area is a part of the “Oslofelt” and has been experiencing earthquakes at one per year on average since 1979 (blue circles). With this data in mind, NORSAR acted rapidly and eliminated any ambiguities concerning a possible earthquake triggered landslide. Knowledge commits!

This is further explained in a press release we published after the analysis: Seismic analysis on Gjerdrum landslide (Norwegian) 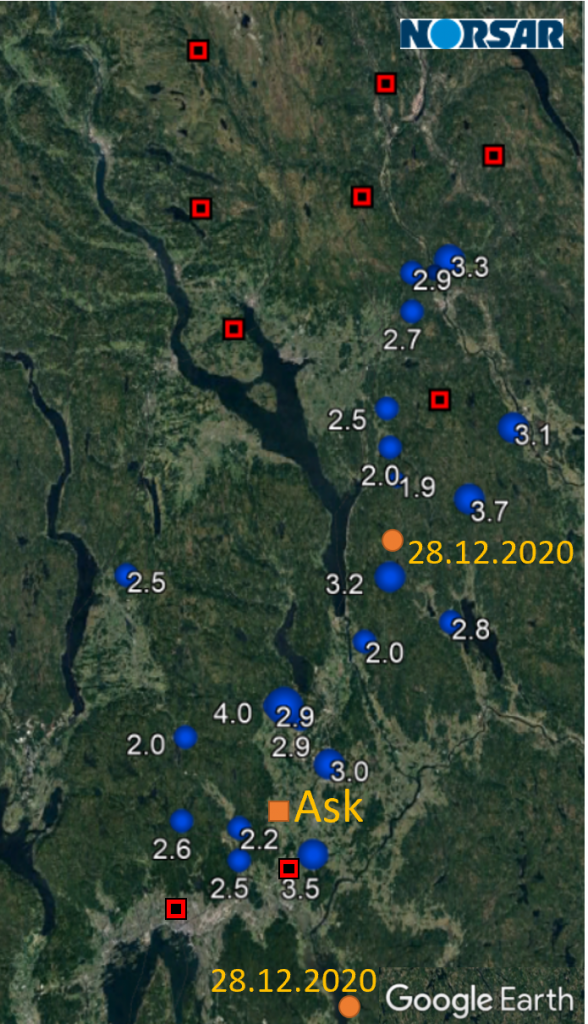