The Hunga volcano erupted on January the 15th 2022. This eruption, the largest since the 1883 Krakatau eruption, was recorded all around the globe from the underground to the edge of space. A huge effort from 76 scientist, including Norwegian institutes (NORSAR and NGI), recordings from both spaceborne and ground-based instrumentation are compiled in a new article in Science.

The Hunga volcano eruption
On the 15th of January 2022, the Hunga volcano erupted about 65 km north of the capital of Tonga, Nuku’alofa (4:20 am local time). This is a once-in-a-century event that produced remarkable atmospheric waves that were recorded globally by a variety of sensors. The most prominent atmospheric wave was the so-called Lamb wave that was recorded circling around the globe four times within six days.

The Hunga main pressure wave is comparable in amplitude to that of the 1883 Krakatau eruption but over an order of magnitude larger than those generated by the 1980 Mount St. Helens eruption. The frequency content of the event spans a very wide band (from inaudible to audible sounds). Accounts of audible sound were reported across Alaska as far as 10,000 km from Hunga (compared to ~4,800 km for Krakatau 1883). Audio signals consist of short-duration signals consistent with repeated “booms” reported by observers. These are the furthest documented accounts of audible sound, which is likely related in part to global population increases and advances in societal connectivity.

The explosion caused seismic waves corresponding with an earthquake of magnitude 5.8. Seismic signals were also recorded at NORSAR's seismic stations on mainland Norway, Svalbard, and at the Troll station in Antarctica.

A community effort
Scientist from 17 countries,  are releasing a new study in Science titled “Atmospheric waves and global seismoacoustic observations of the January 2022 Hunga eruption, Tonga”. The study reports global multi-technology geophysical observations of the explosion. Experts from various fields such as seismology, acoustics, satellite imagery, ionospheric science, and hydroacoustic collected data from around the globe, processed, and analyzed them within a month from the eruption. This study was made possible by the large amount of open and freely-available data and software used for processing, analysis, and display.

A link to the paper can be found here.

The IMS system is fundamental for global monitoring
The main goal of the International Monitoring System (IMS) is to verify the compliance with the Comprehensive Nuclear Test-Ban Treaty (CTBT). This objective is achieved through the deployment of geophysical instruments around the globe to detect signatures of nuclear explosions that might indicate violations of the Treaty. However, the use of IMS data goes way beyond nuclear monitoring. This is once again showcased by this new collaborative paper using data registered by IMS stations including NORSARs own station IS37 in Bardufoss, Northern Norway. The IMS network significantly improve the station coverage with highly-accurate arrays all around the globe. 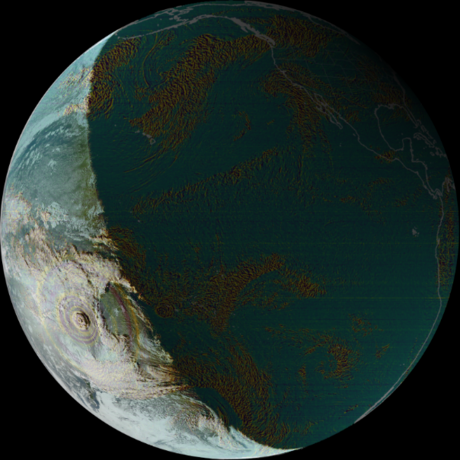 The picture above illustrates the atmospheric waves generated by the Hunga, Tonga eruption from the analysis performed in the paper on the 6.2 micron channel superimposed on the true color composition from GOES-17 geostationary satellite.