NORSAR Software Suite is a common framework for NORSAR software and consists of NORSAR-3D, SeisRoX, and MDesign.

NORSAR-3D 2017 features a novel NORSAR-3D Pro version which is now available for both Windows and Linux. NORSAR-3D Pro 2017 includes the Basic version and in addition a comprehensive set of tools and workflows to build complex models and do illumination studies and survey planning for any type of acquisition geometries. Major new features in this version are: A complete new interactive 3D Model Builder for creating from simple to complex 3D models, a redesigned intelligent Ray Tracer workflow to study wave propagation in detail, and improved workflows to generate Illumination Maps and Synthetic Seismograms. In addition an innovative batch system is included for distributed parallel processing of large simulation jobs on a cluster of Windows or Linux machines.

The NORSAR-3D Pro version is the upgrade version for existing customers. 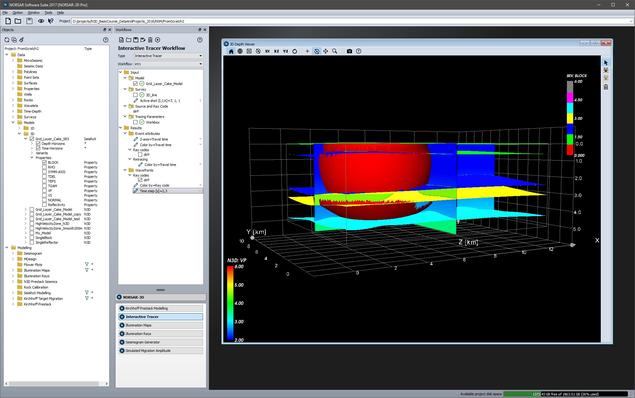 The basic version allows the user to import model elements, e.g., interfaces, property grids and cubes, point sets and polylines, as well as surveys files in the P1/90 and SPS formats.

In many cases, simple models can be used for initial illumination studies and first survey planning steps. The basic version supports therefore to build simple models, e.g. if there only is a property cube, a single target horizon, or a stack of horizontal interfaces that are not interacting in a way that needs any specific consideration, preprocessing or modification. Therefore, the basic version contains specially designed model builders tailored to the varying input model elements:

Single Block Model Builder: When interested in traveltimes or amplitudes for direct waves only, a single block model can be used. Here single property cubes, either generated in the software or imported, are used to define the elastic properties.
Single Reflector Model Builder:  In order to generate Illumination maps a target reflector is required. The model properties above and below the target reflector can be set by either selecting property cubes or set to constant.
Grid Layer Cake Model Builder The grid layer cake models can contain various surfaces which separate the different layers. The property values are either constant or gradients.

For a systematic and comprehensive analysis of ray propagation, the illumination rays workflows should be used. Here, many target points can be analyzed, and all reflection angles and azimuths are taken into account. The results for each target point are shown in a survey- and a target-domain rose diagram.

Illumination maps show how well a target horizon is illuminated by a survey. The basic map is the hit map, which displays for a specific survey how many rays from shots to receivers reflect on the different parts of the horizon. Shadow zones clearly stand out on hit maps.

The 3D viewer contains some interactive analysis tools, such as ray-tracing a fan or cone of rays from a point on a NORSAR-3D model horizon

NORSAR-3D Pro includes the Basic version, and in addition it contains a comprehensive set of tools and workflows to build complex models and to do illumination studies and survey planning for any type of acquisition geometries. NORSAR-3D Pro 2017 is backwards compatible with older versions of NORSAR-3D project data, and it is released on both Windows and Linux.

Now a novel interactive 3D model builder is available. It allows to build complex 3D models, and it displays the model elements in the 3D viewer with access to all other project elements.

Use interfaces of any shape, including multi-z-valued interfaces.
Intersect and combine interfaces.
Build blocks (volumes) automatically as well as interactively with extensive graphical support.
Set P- and S-wave velocities, densities, Q-factors, and Thomsen parameters as constants, grids, or cubes independently in each block.
Use VTI anisotropy as well as axis of symmetry orthogonal to the layering.
Allow gaps and undefined areas in the models.

The re-designed interactive tracer can be used to analyze the ray tracing results in more details for one selected shot location. The propagated wavefronts can be plotted as well as the corresponding ray attributes such as traveltimes and amplitudes.

The Seismogram generation workflow generates synthetic pre-stack seismic data for a user-selected part of the wavefield based on dynamic ray tracing. Both isotropic and anisotropic models are allowed, and in these structural models any combination of reflected, transmitted and converted P- and S-waves can be propagated.

This workflow generates synthetic pre-stack seismic data including diffractions and noise based on the Kirchhoff process. These results can be used for PSDM simulation, processing test, and velocity sensitivity studies. Current implementation is limited to primary reflections, but for rather complex sets of target horizons.

Simulated Migration Amplitude (SMA) maps show estimates of how the amplitude will vary along the target reflector after pre-stack depth migration. This workflow allows you to investigate effects on illumination including attenuation effects in the overburden as well as varying reflectivity at the target. The Simulated Migration Amplitude workflow does not only compute the SMA maps; in addition it computes all the attribute maps that are also made in the Illumination Map Workflows.

The Reflectivity Viewer allows you to view the reflectivity profile for a given impedance contrast as a function of incident angle.

When running a workflow, it is distributed over all available CPU's and cores on the local  computer. This improves computer speed significantly. In addition, it is also possible to distribute these jobs to other computers available in the network. The execution time of the workflow will decrease dramatically.

Synthetic seismic data generated in a workflow can be exported to SEG-Y files. Other workflow results are exported as ASCII format.

In addition to the 3D viewer, a 2D viewer is used to display synthetic data and event attributes such as traveltimes and amplitudes.

NORSAR-3D Expert includes the Pro version, and in addition it provides unlimited batch processing capabilities and access to the project results to do in-depth analysis or tailored applications. Very complex models can be made in the Expert version, in that model elements can be edited on a very detailed level.

Main new feature in this version is the introduction of the Kirchhoff Target migration workflow.  Furthermore, this new version supports the extraction of S-wave anisotropy parameters from calculated event sets.

Kirchhoff Target migration workflow is introduced. It can be used to generate migrated sections from Kirchhoff pre-stack data. This workflow can be used for e.g., velocity sensitivity studies.